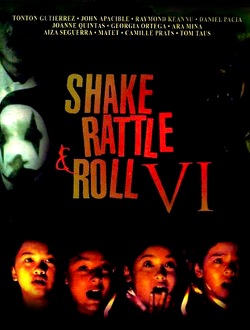 Shake, Rattle & Roll VI is the sixth installment of the Shake Rattle & Roll franchise. It was distributed by Regal Films. It is directed by Maurice Carvajal, Anton Juan & Frank Rivera. This film is not an entry of the Metro Manila Film Festival as other installments.

Her parents are fighting, a neglected child named Jennifer finds solace in watching her brand new TV. Mr. Boo the clown exited on the TV and invites Jennifer into his world. When Jennifer refuses to go Mr. Boo takes her and bring her to the TV.

The ghost of Mauro was the only connection between three teenage girls.  The three girls must find a way to put the boy's soul to rest

Manrey is a college student. Unfortunately, mysterious deaths began and suspicion flew through the air that the culprit was a girl named Luna who was transforming into a monster during a full moon. However, the girl falls in love with Manrey. At the end Manrey learns a lesson for loving a woman

Retrieved from "https://shakerattleandroll.fandom.com/wiki/Shake_Rattle_and_Roll_VI?oldid=6716"
Community content is available under CC-BY-SA unless otherwise noted.