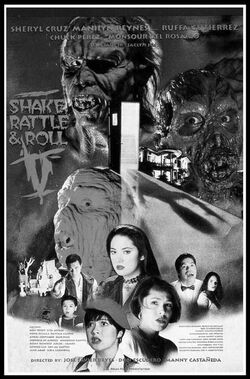 Shake, Rattle & Roll V is the fifth installment of the Shake Rattle & Roll franchise. It was distributed by Regal Films. It is directed by Manny Castañeda, Don Escudero & Jose Javier Reyes. This film is an entry of the 1994 Metro Manila Film Festival.

A couple takes a vacation on a secluded island and strange forces are at work that seems to keep them on that island. When her boyfriend suddenly grows ill, Laurie finds a mysteroius good-looking man in the woods whom she named Victor, whom unknown to her is infact an Engkanto (known as Maligno). He seems to exhibit supernatural powers. He offers to cure her sick boyfriend on one condition that she stay with him forever. Will she accept any foods from that good-looking man to save her loved one?

A family of siblings moves into their new apartment but little did they know of a tragedy that occurred within its walls. A ghost of a murderer manifests itself in a form of a shadow and has now set its sight on them. They need to leave and trap the shadow being in that house before they were all killed.

Two rich opposite siblings are kidnapped and taken to an old abandoned hotel to await for the ransom for their release. What they do not know as do the kidnappers that the hotel they have entered is home to an impakto, who is their boss and it is feeding time. Will the siblings stop quareling each other and work together to survive two threats on their lives against this savage predator?

Retrieved from "https://shakerattleandroll.fandom.com/wiki/Shake_Rattle_and_Roll_V?oldid=6807"
Community content is available under CC-BY-SA unless otherwise noted.