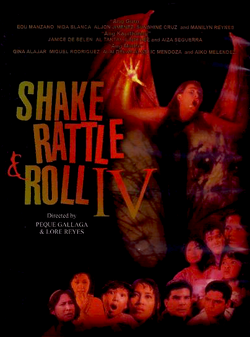 Shake, Rattle & Roll 4 is a Filipino horror movie released in 1992 and the fourth installment of the Shake, Rattle & Roll is distributed by Regal Films. It is directed by Peque Gallaga and Lore Reyes. This film is also an entry to the 1992 Metro Manila Film Festival.

One night, Jodie is still on the computer room finishing her project with Mabu. Mabu said that Jodie is in love with Mr. Zerrudo but Jodie pranks him.

Jodie and Mabu hid in a room and Mabu started creating something. Mr. Zerrudo breaks the door and starts attacking Jodie. But then Mabu shoots him with the invention he was making earlier. As Jodie and Mabu began celebrating, Mr. Zerrudo pulls Jodie's foot. Mabu successfully kills him.

One by one the children who are playing at a neighborhood park are abducted by a Witawit, a monstrous looking creature who lives in the park’s trees. Nikkie and Yaya Tising try to get to the bottom of the mystery and rescue the abducted children.

The colorful ladies who live in a crowded slum are all convinced that a Manananggal is responsible for a series of horrific murders. They suspect that their new neighbor Aling Iya is the bloodthirsty creature but Teks suspects that the barangay's assigned nun is the creature, which later revealed to be the real Manananggal.

Retrieved from "https://shakerattleandroll.fandom.com/wiki/Shake_Rattle_and_Roll_IV?oldid=6714"
Community content is available under CC-BY-SA unless otherwise noted.