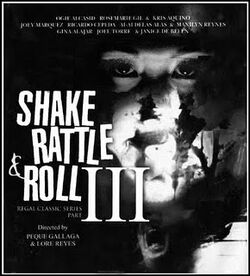 Shake, Rattle & Roll III is the third installment of the Shake Rattle & Roll franchise. It was distributed by Regal Films. It is directed by Peque Gallaga and Lore Reyes. This film is an entry of the 1991 Metro Manila Film Festival.

Tanya (Kris Aquino), a mother that has moved to a new house with her baby daughter Jane. Everything went fine, until the house fell victim to a blackout. Tanya, worried about Jane, decides to check her daughter along with her mother, Lydia (Rosemarie Gil). She finds her housekeeper Virgie (Mae-Ann Adonis), who had been driven insane, hiding in a closet with Jane. Tanya grabs Jane but Virgie warns her that someone will take her baby.

After Tanya sent Virgie away, an old spirit who had passed in the house watched her. Tanya hires a new nanny Aida (Eva Ramos).

Rosalyn (Janice de Belen) just got word that her Ate Rowena (Gina Alajar) died in a remote part of her province. Soon, Rosalyn discovered that Rowena was not dead but a zombie-turned corpse. When she returned to her province, a young boy Tano told her that her sister was brought back to life. It was at a mansion owned by Dr. Redoblado, a cult leader, and his wife, who worships the Devil. Rosalyn spotted her elder sister eating dirt, so she asked Tano how to end her misery. She forced her elder sister to return to her grave. Redoblado arrived, but angered at what Rosalyn did, he tried to kill her, but got killed when Rowena grabbed Redoblado by his foot and killed him and got buried along with the zombie.

Maloy (Manilyn Reynes) a nature-loving but troubled and dolt science girl who is constantly harassed by her dormmates, led by Dezzi Rae (Ai-Ai delas Alas), is having a field trip with her classmates and teachers in a local lake for their science project. Maloy's best friend Sally (Candy Pangilinan) found strange eggs found in the lake. After Sally gave the eggs to Maloy, they hear a disturbing voice from the lake. As Sally was swimming in the lake, an unknown sea creature drowns her. After the teachers and students recover her dead body, Maloy suspects her friend's dead body covered in moss and gunk. Before they leave, the creature resurfaces out of the lake and enters in one of Maloy's coolers.

After Maloy returns to the dormitory, the strict dormitory owner Eba (Vangie Labalan) warns her about going to the lake. Eba explains to her about a mysterious sea creature living in the lake; the Undin, a water-nymph sea creature living in the water. Whenever someone disturb them, especially their belongings and eggs, kills them. Maloy realize that Sally had stolen the eggs she found from the Undin before her death but Eba assures that her story was told by her grandmother. As Eba leaves, the Undin jumps out of the cooler. Maloy grabs the eggs and tried to call the Undin to give the eggs back to her but the Undin was hiding from her. Eba and the dorm mates appear at the kitchen and Maloy tries to convince them that the Undin was real, but they do not believe in her.

As Dezzi Rae had a party with her dorm mates and their friends at the dormitory, Maloy began to use the dormitory's bathroom to take a shower. The Undin, who had moved already to the bathroom, kills Eba and one of the party-goers, Ojay (Joey Marquez), by spitting them with her acidic saliva after Maloy witness Ojay's body melting. She notice the Undin appeared and took the eggs to call the creature but Dezzi Rae and her friends appear. Maloy tried to convince them that the Undin was here and explain to them of Ojay's death. She show them the eggs but Dezzi Rae grabs the eggs from her and she and her friends began playing with them. Dezzi Rae forced Maloy to watch as she began destroying the eggs. Maloy manage to break free from the group and overpowers Dezzi Rae. As she and her friends leave the bathroom, Maloy finds one of the Undin's eggs remained. The Undin, enraged by the death of her children, kills Dezzi Rae and her friends. Maloy overhears the group's screams, enters the dormitory and watches the Undin kill Dezzi Rae's friends. Maloy calls the Undin and knows that she was a mother. Maloy confesses to the Undin that she & Sally never meant to steal her eggs and knows about a mother's life. Maloy began to give the egg back to the Undin and puts her back to the cooler, where Maloy encounters the creature earlier, to bring her back to the lake.

Maloy returns to the lake to bring the Undin back home. After bidding farewell to Maloy, the Undin reunites with her mate as they swim away back to their home.

Retrieved from "https://shakerattleandroll.fandom.com/wiki/Shake_Rattle_and_Roll_III?oldid=6828"
Community content is available under CC-BY-SA unless otherwise noted.