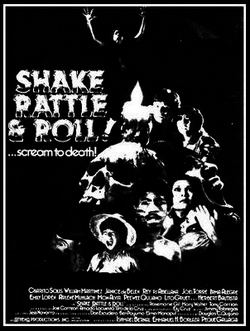 Shake, Rattle & Roll is a 1984 Filipino horror anthology film directed by Emmanuel H. Borlaza, Ishmael Bernal, and Peque Gallaga. It is the first out of fifteen installments in the Shake, Rattle & Roll film series. This is the only film in the series to be produced and distributed by Athena Productions while the rest of the installments are produced and distributed by Regal Films. The film was an entry of the 10th Metro Manila Film Festival, with Herbert Bautista winning Best Actor.

Paolo (Rey "PJ" Abellana), Girlie (Arlene Mulach) and Johnny (Joel Torre) decide to perform a spirit of the glass in an abandoned house. When they contact the spirits; namely Isabel, Ibarra and Juanito, the spirits break free from the glass and possess the teens.

In the Spanish era, Isabel is the daughter of Soledad and Antonio. She loves Juanito, a soldier who is battling against the Spaniards, but has to love her suitor Ibarra, a handsome and wealthy man and Juanito's companion. When Juanito leaves for battle, Isabel awaits his return. The next day, one of Juanito's companions report to Isabel that Juanito died from the battle with the Spaniards. Devastated by his loss, Isabel continues her engagement to Ibarra. After Isabel and Ibarra celebrate their marriage, they are attacked by Juanito, who is revealed to be alive and mad when he discovered her betrayal, but Ibarra kills him. With his last breath, he promises to get revenge on Ibarra and Isabel for their betrayal. Moments after his death, Ibarra commits suicide from the guilt of Juanito's death. Isabel dies from her sickness due to excessive depression. Their spirits haunt the abandoned house and begin to reenact their past.

Back the present, Paolo and Johnny, who are still possessed by Ibarra and Juanito, begin to fight each other but the caretaker, Mang Castor saves them and Girlie by warding off the spirits from their bodies. The teens seem to go back to normal but Johnny stabs Paolo with an axe, revealing he is still possessed by Juanito's spirit. With his last ounce of strength, Paolo grabs the gun and shoots Johnny as Juanito's spirit is expelled from Johnny's body. The boys die from their wounds, in front of the traumatized Girlie.

Lorna (Charito Solis) and her daughter Virgie (Janice de Belen) move to a new house with Dodong (William Martinez), the nephew of Lorna's husband. Their home includes an old refrigerator from the kitchen.

The next day, Lorna becomes suspicious of their refrigerator after she saw visions of body parts around her when she gathered food. Later, when their housekeeper Nelia (Emily Loren) was taking her snack, the refrigerator attacks her. The fridge drags Nelia and slams her repeatedly before she collapses to the floor dead.

In Detective Caloy Torres' (Lito Gruet) investigations on Nelia's death, the detective believes that Dodong was responsible for the incident but Lorna claims that he is innocent. After he leaves the house, Torres explains to Lorna about the incident and Dodong. He tells her that she must watch over Dodong and her daughter. Meanwhile, Virgie's boyfriend Max (Mon Alvir) was killed by the fridge when Lorna discovers his severed arm. Lorna calls detective Torres to their home to arrest Dodong but the detective finds Dodong's severed head in the fridge.

Torres becomes suspicious of how the incident is related to previous crimes that happened in 1975. In his research, he finds in old newspapers that a serial killer murders his victims and hides their chopped body parts in the refrigerator. Concerned about the danger this poses to Lorna and her daughter, Torres races to the house to save them. Meanwhile, at the house, the refrigerator begins to consume Virgie. Torres and Lorna arrive and try to save her but the fridge was able to consume Virgie further. Lorna attempts to pull the plug off the fridge from the socket, neutralizing the refrigerator's power and saving her daughter from danger.

After Lorna comforts her daughter, Torres shows the family the newspapers about the crime that happened in the house.

Douglas (Herbert Bautista), a teenager from a province, stays with his grandmother along with his young brothers when their parents were working in Davao. The next day after Douglas tried to serenade a young woman named Anita (Irma Alegre), he discovered his friend Kadyo was murdered in the forest.

A manananggal is said to live within the vicinity and is out to eat people. Later, he found out that the mananagal is actually the girl he is serenading. He is given the task by his grandmother to kill these creatures. Having to found a way to prevent it from rejoining the other half of its body, he must now survive the night to protect his family from the creature's ferocious attacks.

Irma Alegre
Add a photo to this gallery

Retrieved from "https://shakerattleandroll.fandom.com/wiki/Shake,_Rattle_%26_Roll!?oldid=6811"
Community content is available under CC-BY-SA unless otherwise noted.